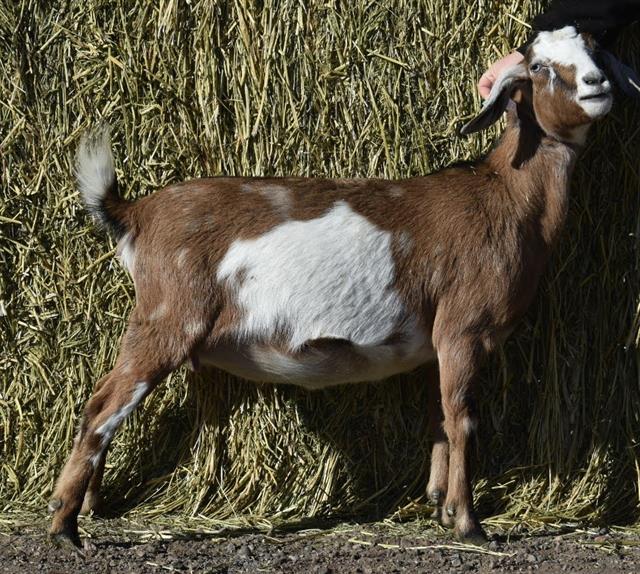 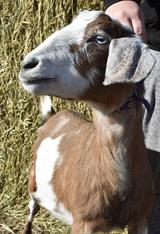 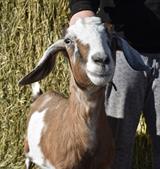 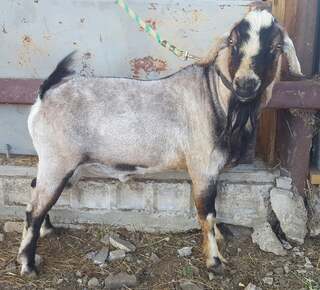 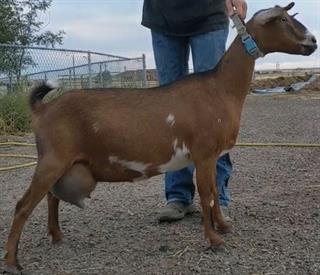 Lakota is a beautiful doe that excels in general appearance, and stature. Standing at 21.5” (measured at the withers) as a two-year old and exhibits a long, lean neck that blends smoothly into her withers which are slightly taller than the hips (measuring at 21”) and leading into her barrel (measuring at 40” in girth). Her brisket could be more defined, she has a 5” chest floor, but she has a very nice rump width (measuring at 11" from thurl to thurl) which has accommodated her in delivering a large singleton this year unassisted.

She has a nice strong back that is straight with a level chine and a wide loin. She displays an ideal rump angle but I would like to improve on her rear leg set when viewed from the rear to more comfortably accommodate her udder. She demonstrates proper rear angulation (when she cooperates and let's us set her up properly) although added strength and set of pasterns under the cannon would be optimal. That being said, much of this could be in my hoof trimming skills which leave something to be desired. Something that I am improving on in myself.

Ideally I would like to see a shorter head with a more convex roman nose and I would also like to see a more broad nose and nostril set. Her ears have nice shape but additional length would be welcomed and she has a bit more ear control over them than I like but as an F2, I am pleased with them.

Her mammary system is the icing that tops such a beautiful cake. Her fore udder extends into her torso nicely indicating that she will have capacity, desirable shape, and productivity over her breeding career. As her mammary system matures and gains weight, we are seeing that her rear udder is wider at the base than the top which I would like to improve on but I am very pleased with her medial and lateral attachments. She has nicely placed teats at nearly 2/3 of the distance from the medial and her teats uniform size and shape.


Moxie (Lakota's dam), has her milk star with both MDGA and TMGR meaning she has her *P and her *D giving Lakota the opportunity to become a 2*P/2*D once she is on test this year.

Thunder Struck (Lakota's sire) inherited his milk star through his parents. Both his dam and his sire's dam earned their milk star. We retained enough kids that hopefully we will someday earn his + through his offspring.

[...] advantage in general appearance. She is longer from hips to pins, and had more width between the hocks. She also has the advantage in body capacity. She is wider in the chest floor and fuller at the point of elbow. 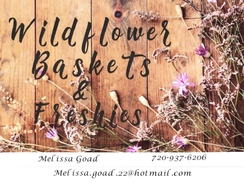 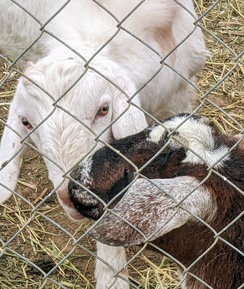